Posted on November 30, 2014 by simonbroderick 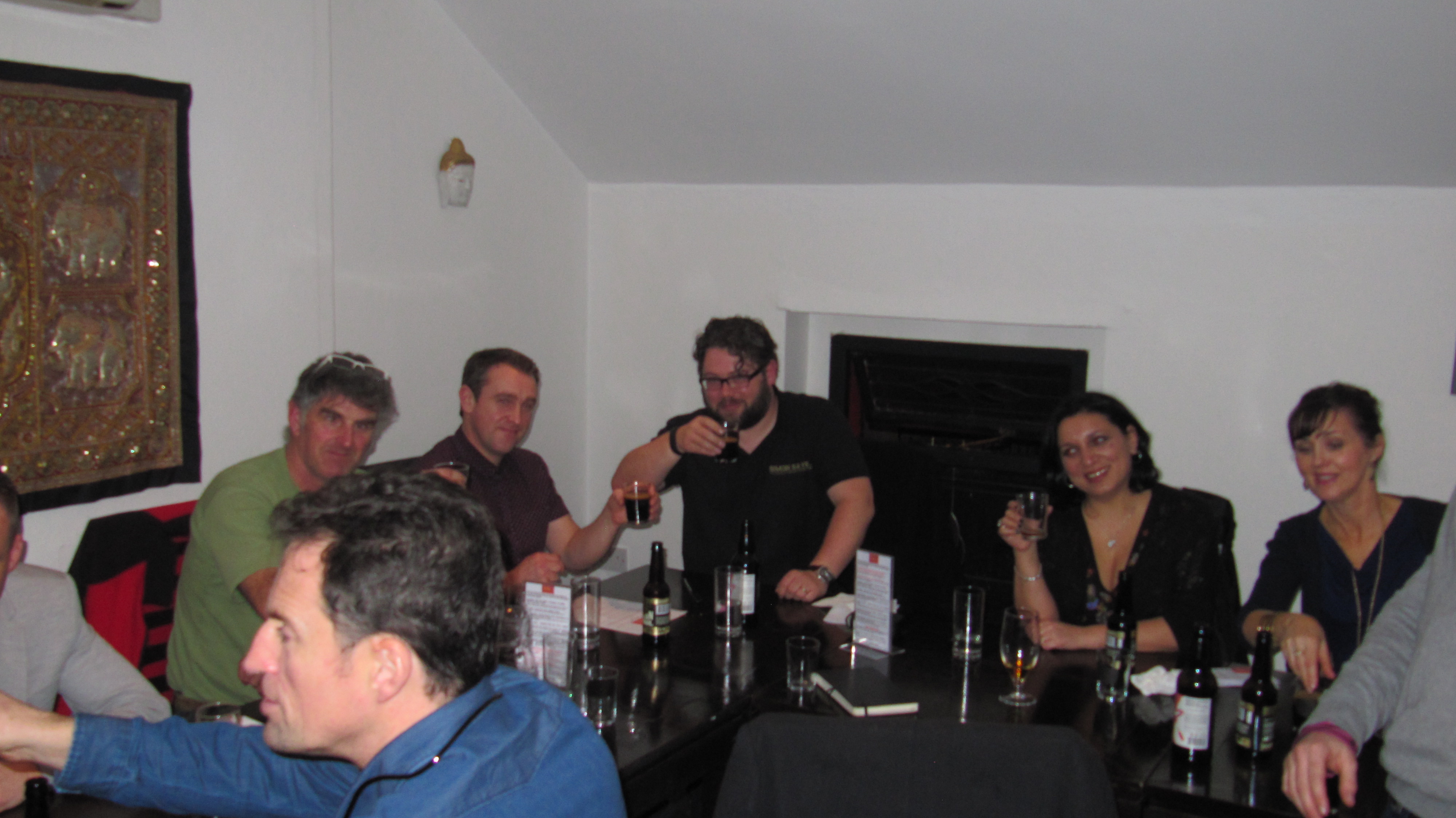 The air of anticipation in the build up to last night was incredible. Other beer clubbers were asking me what they could expect and I only had a rough idea myself , Adam Lyons was playing his cards close to his chest. I wasn’t worried of course, Kin Khao’s reputation for great food meant that we had nothing to fear, they really pulled out all of the stops last night though! Adam had talked with his chefs about pairing the food with the beer and they were delighted to be able to prepare something completely unique for us. James from Vanguard had then expertly selected the beer pairings. We were in for a treat. 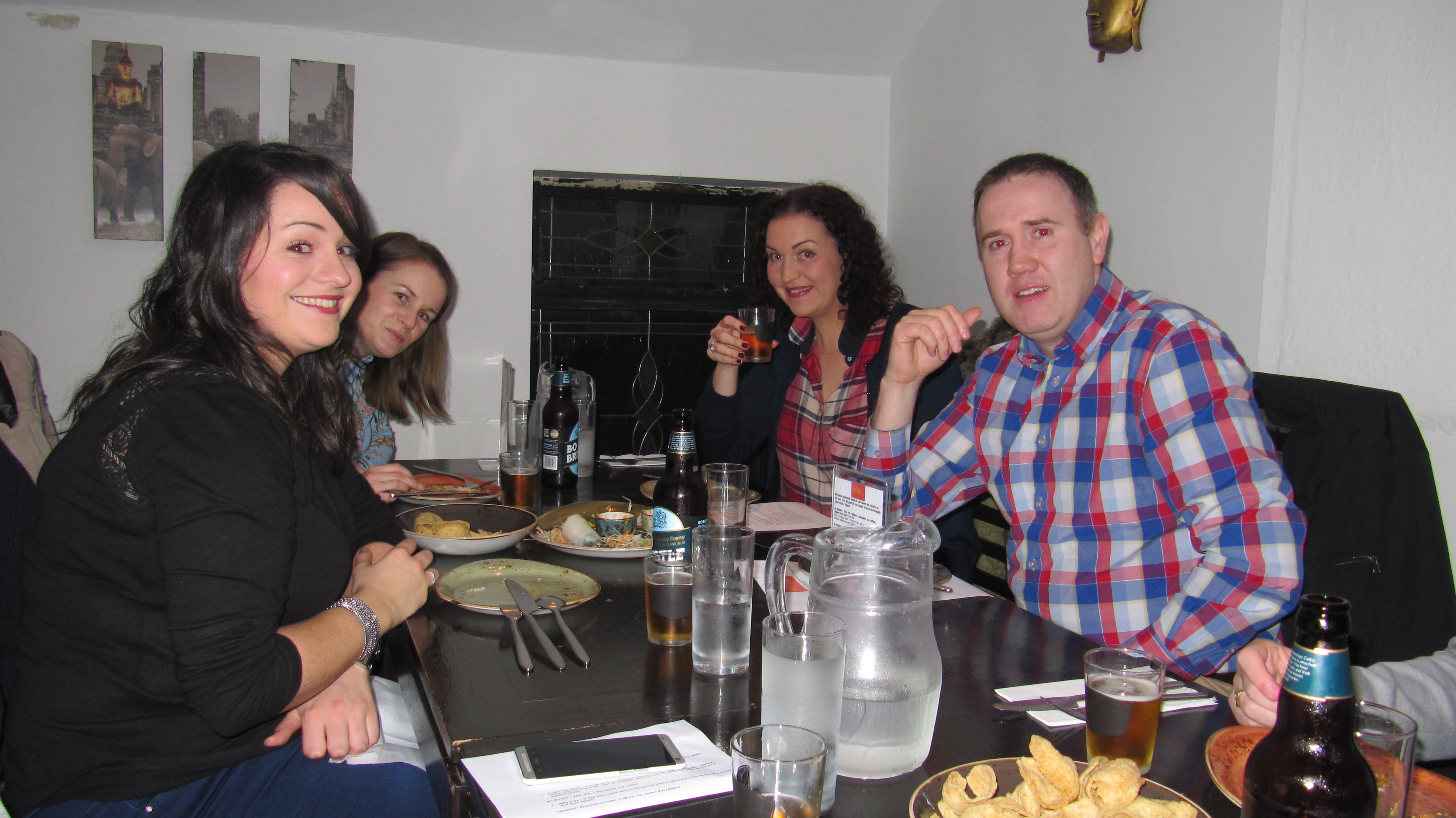 We started off with some seabass rolls which were filled wth rice noodles,mint,coriander and spring onion. These were accompanied by an old favourite of mine; Bo Bristle’s IPA. We were on the right track straight away. 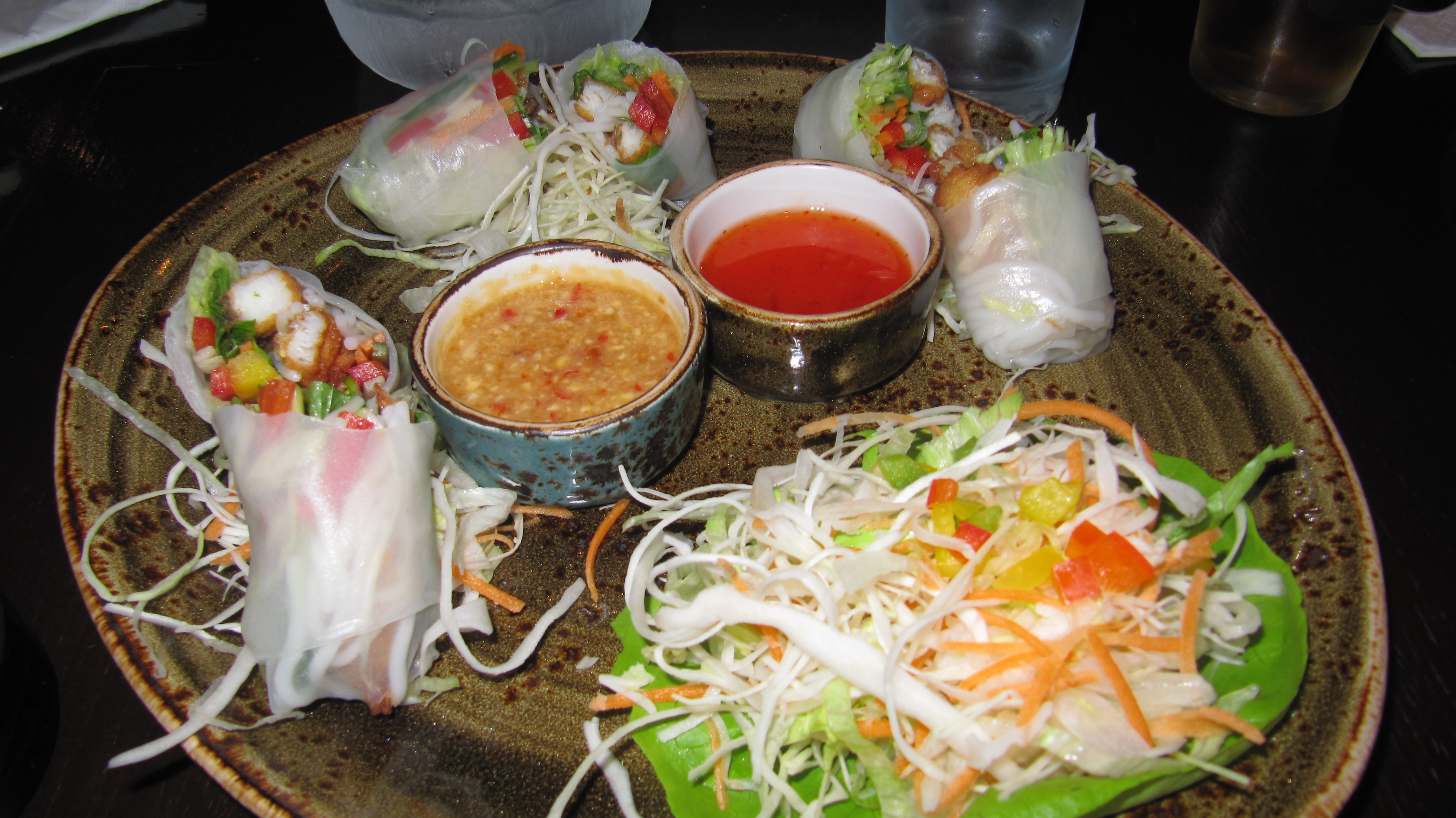 For our second course we had pork neck which had been marinating for three days paired with Tempted Strawberry Cider. Regular readers will know I’m not a huge cider man and the Cider Correspondent herself was at home watching the Toy Show with the kids so I had to get stuck in! Jason who was sitting beside me fell madly in love with the cider, it wasn’t like other ciders that he’d had before and it married really well with the pork. 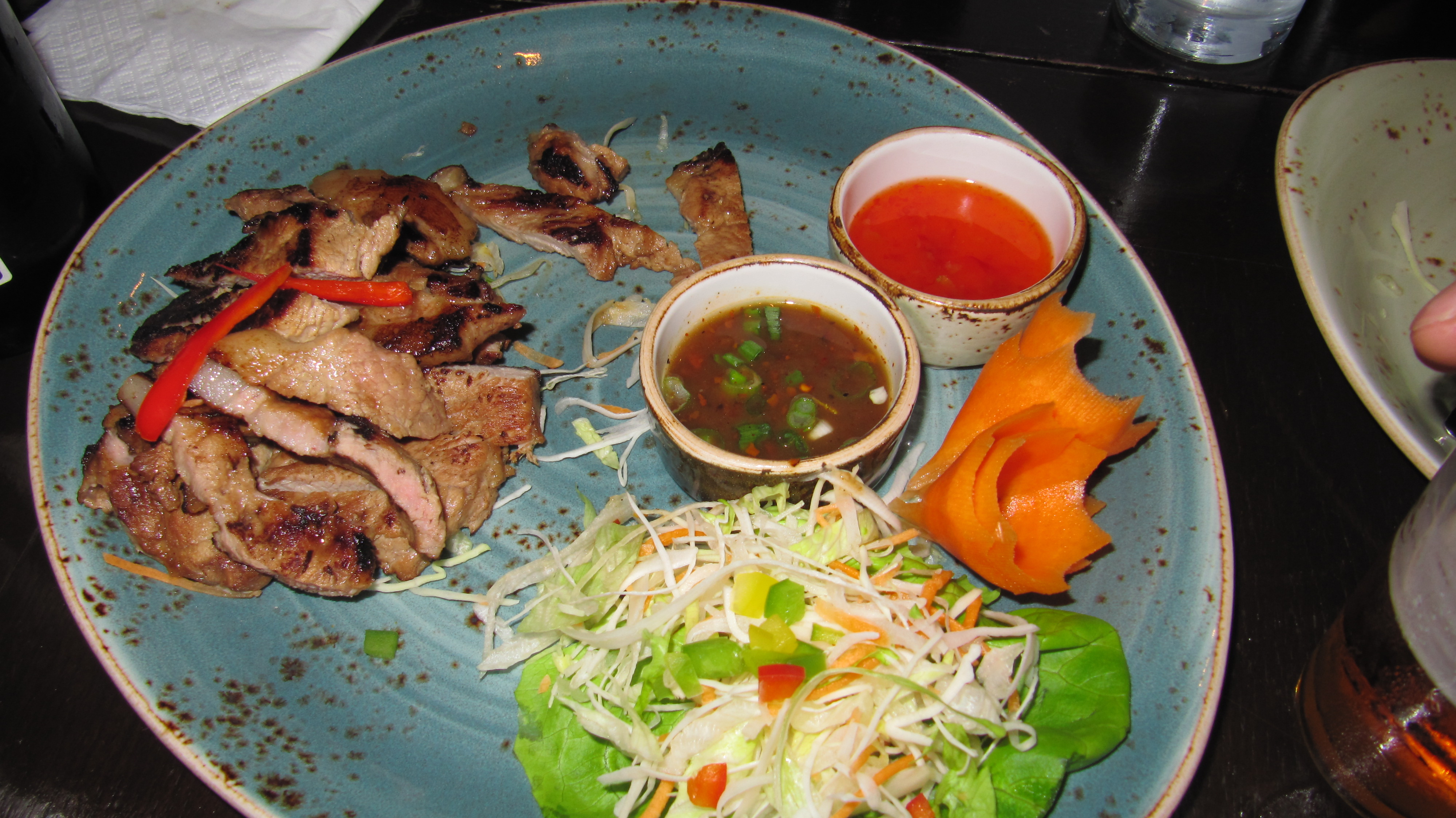 After that we had Tom Jeud, which is a clear soup, I thought it was the best cuppa soup in the world! 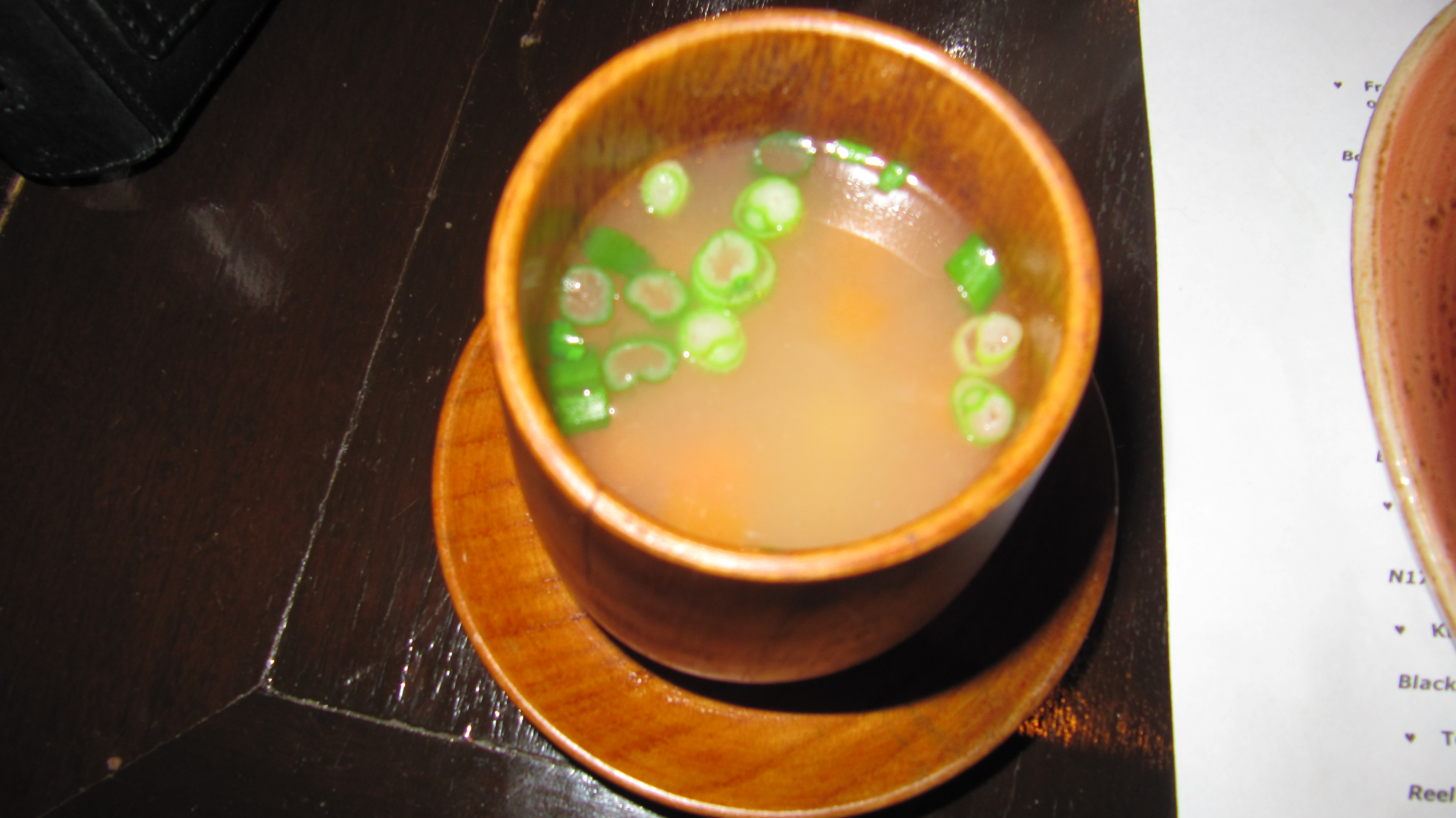 Our next course was air dried beef with a siriacha sauce. The sauce was seriously hot and the Bo Bristle Amber Ale that was served with it went down fairly quickly. We were lucky James shared any with the rest of us! 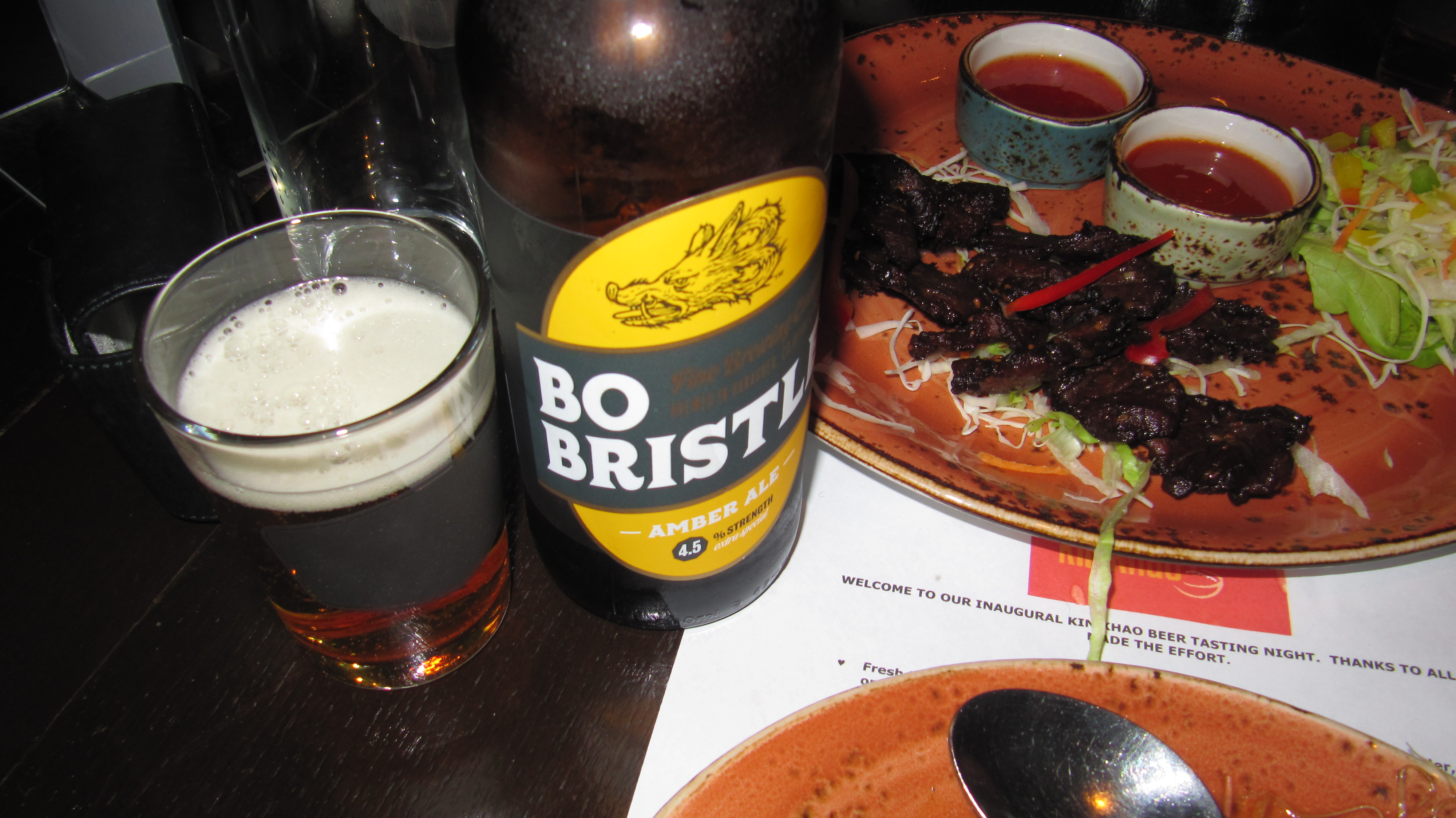 One of the dishes I enjoyed most was the duck with crunchy roasted rice which was paired with N17’s Rye Ale. 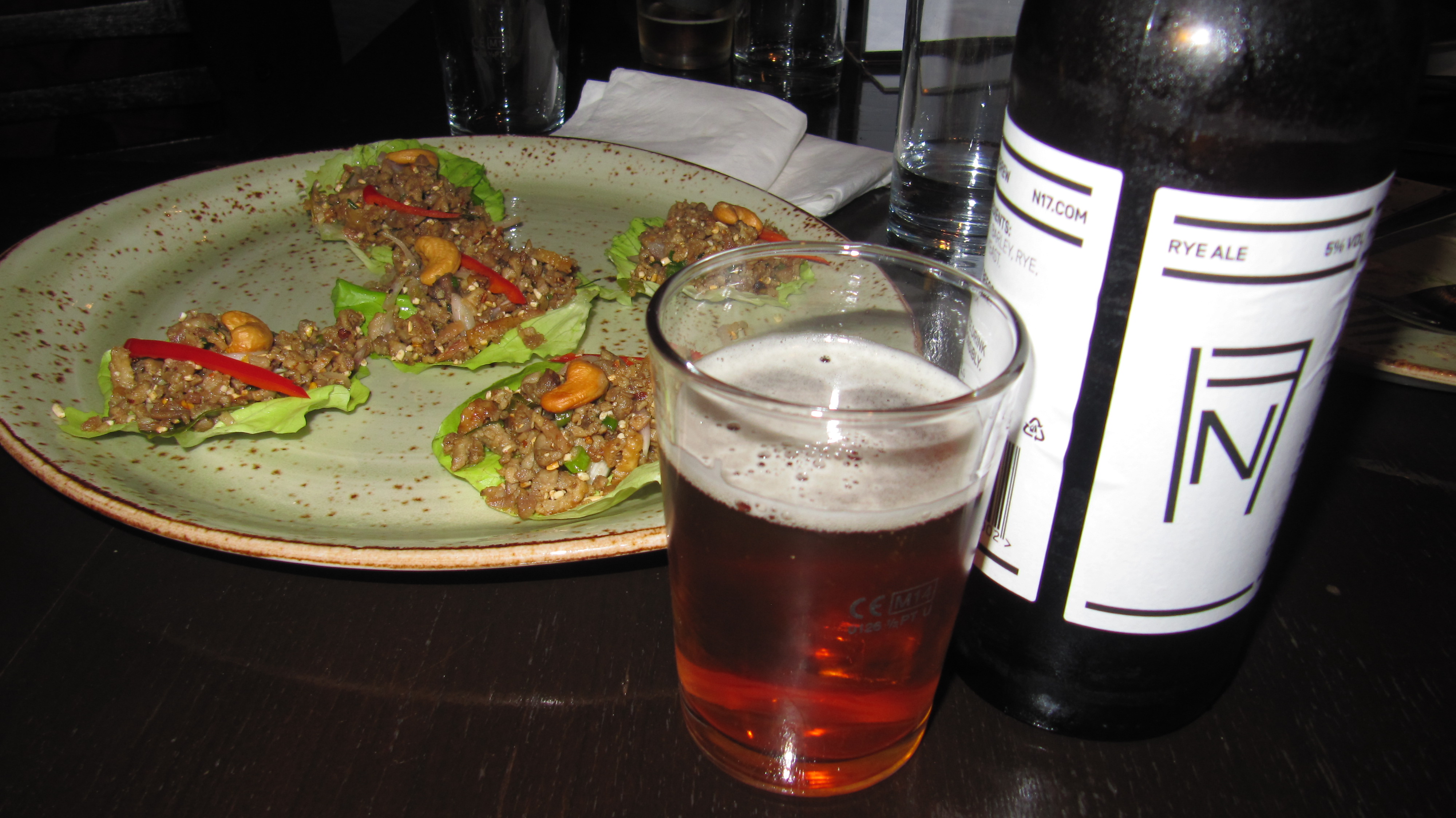 The last dish of the night was home made mango ice cream that perfectly matched Reel Deel’s Irish Blond, Irena made her love for Kin Khao’s sticky rice known and a few portions of that were called for and shared around the table. What a way to finish the evening, but wait, there was more! James had brought us a special treat to round off proceedings, Eight Degrees 2014 Russian Imperial Stout, it’s a beautiful rich coffee like stout. Everyone really enjoyed the evening and I’d like to thank James for selecting some fine beers and Adam and the chefs in Kin Khao for an amazing gastronomic experience. That’s it for Athlone Beer Club for 2014 but we’ll be back in the New Year, thanks for all of your support! 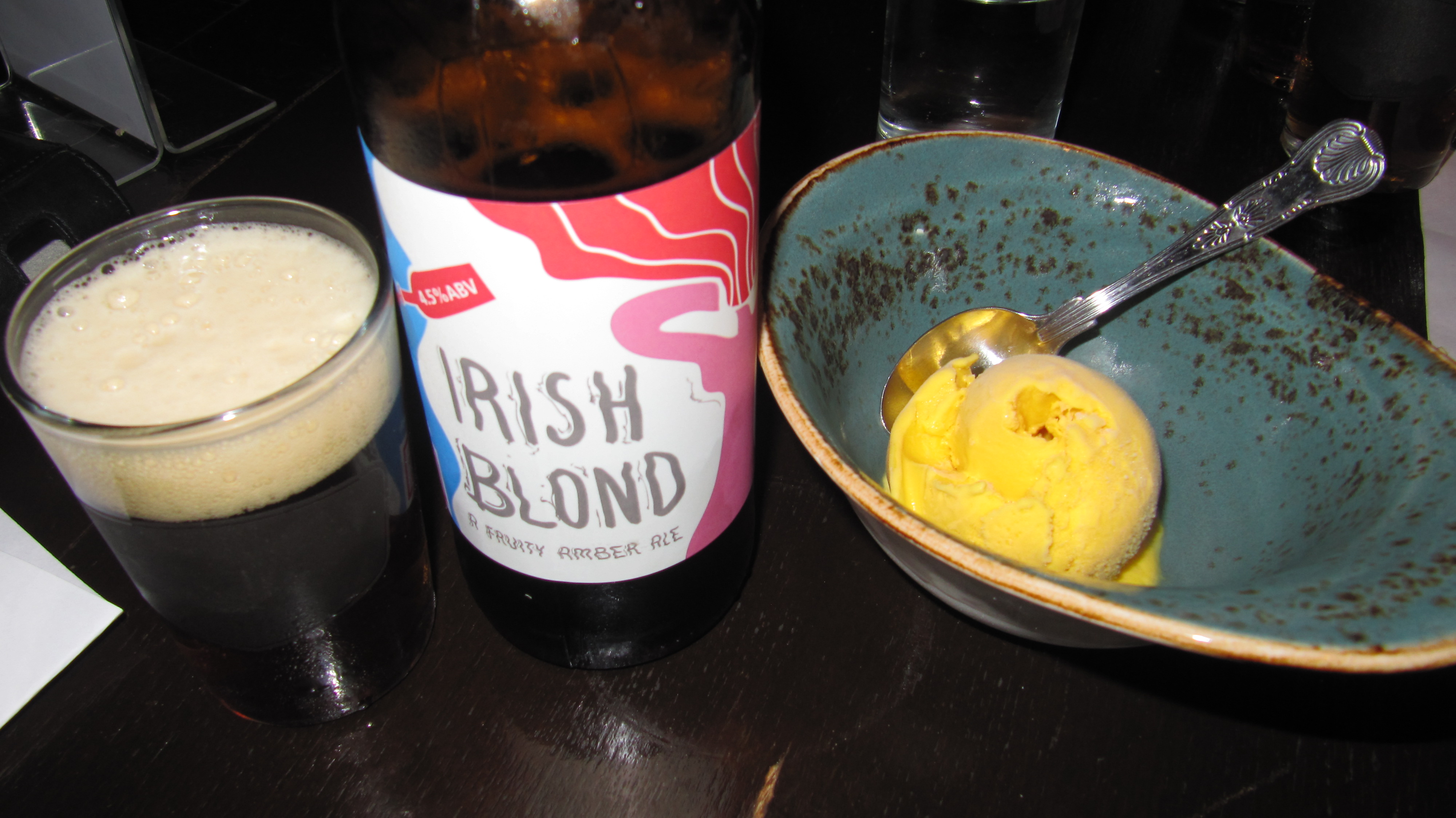 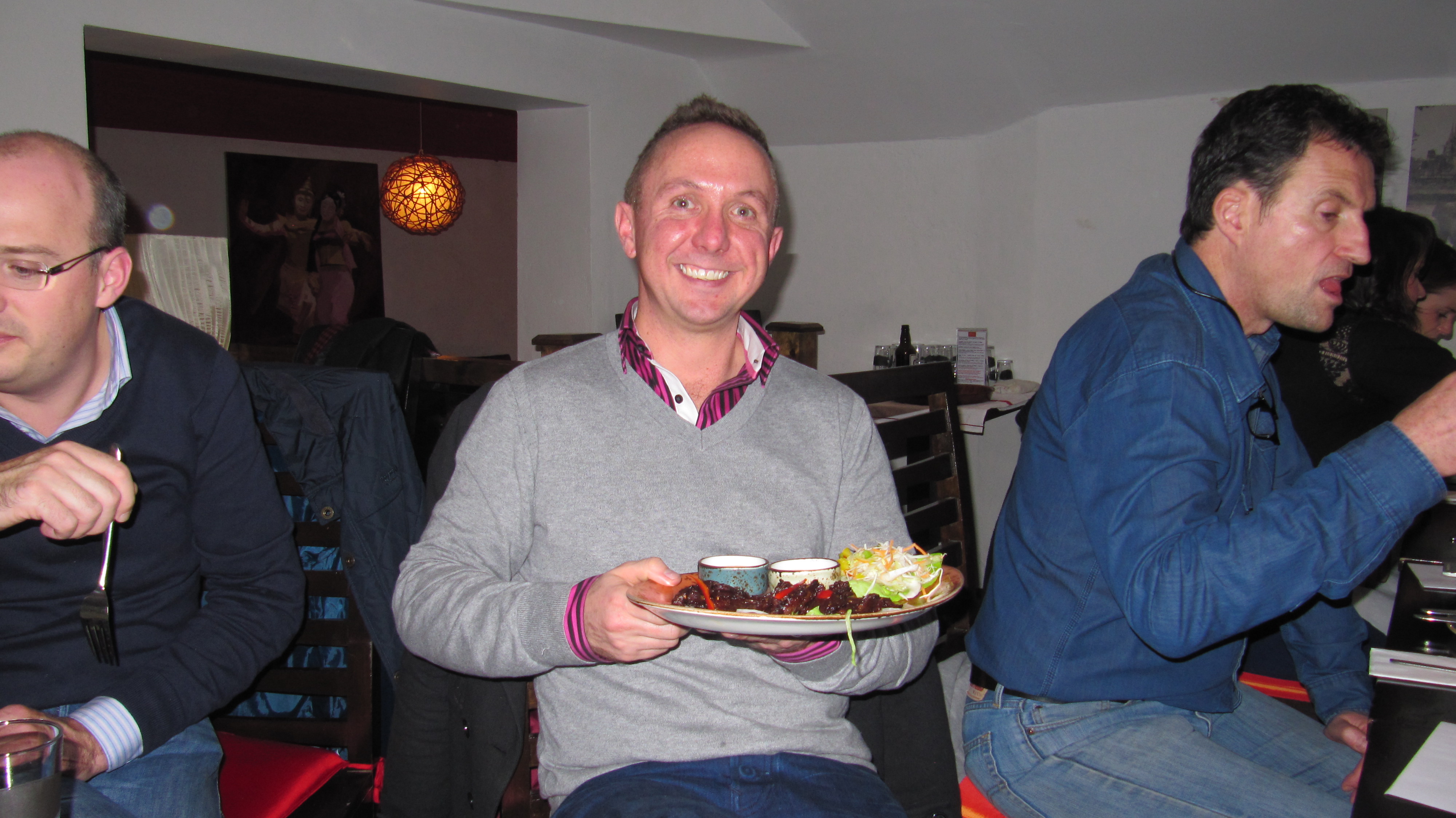 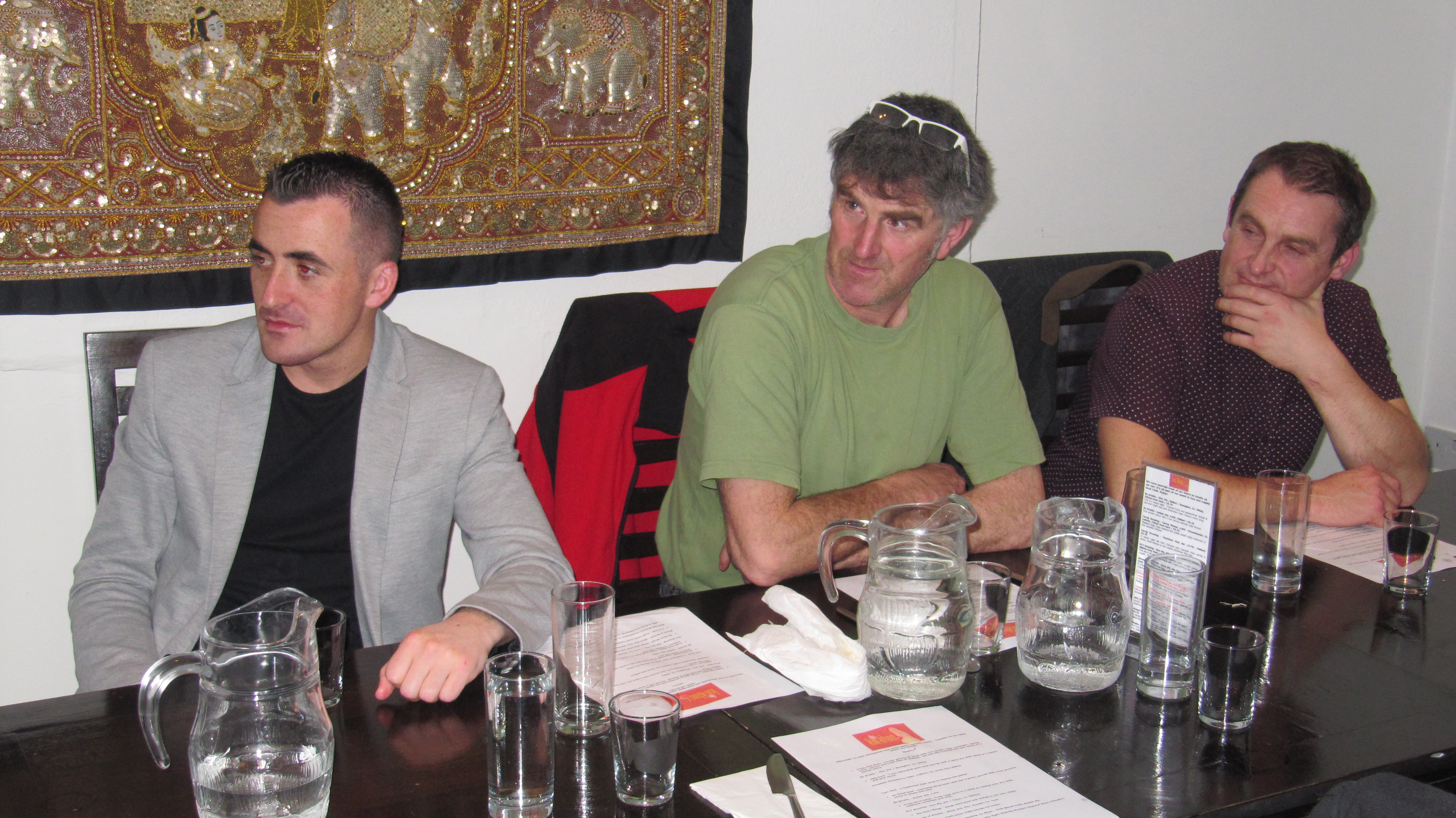 After that some of us made our way to Maguire’s for a night cap, an appropriate way to conclude the evening as that’s where the Athlone Beer Club began! 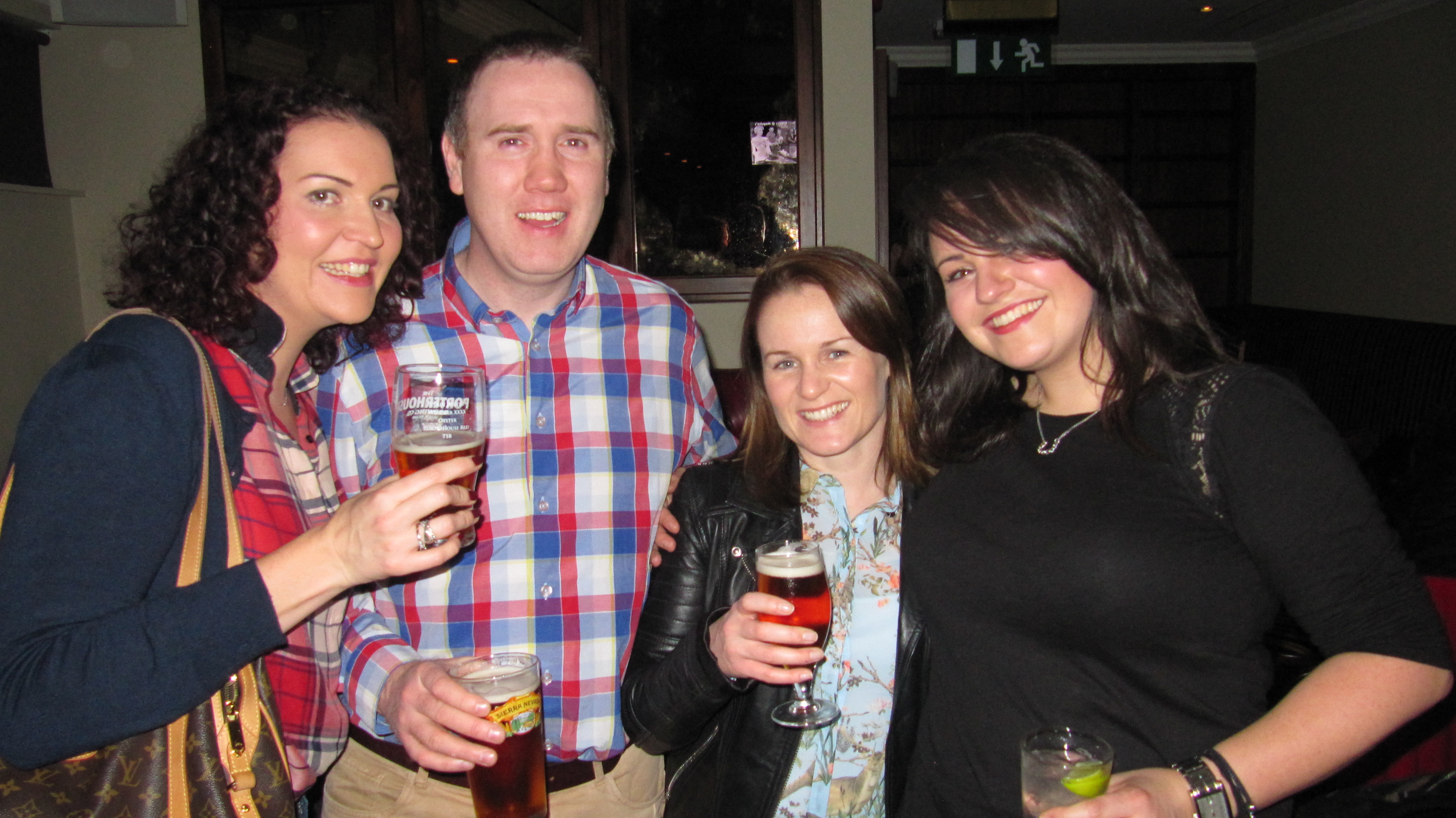