Posted on February 28, 2015 by simonbroderick 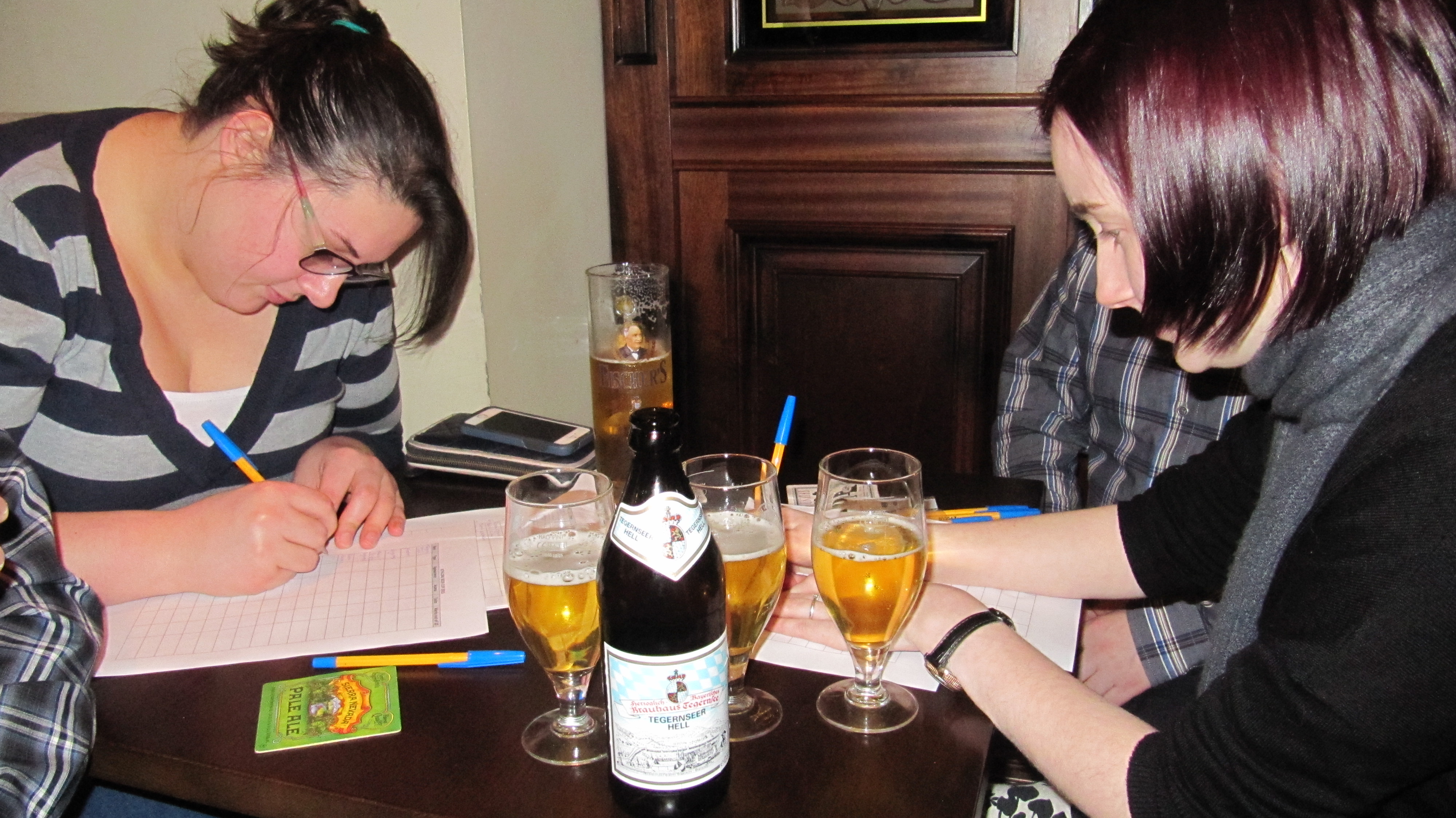 A year older and maybe a little wiser, I returned to Maguire’s where the first Athlone Beer Cup was held and Athlone Beer Club was born. This time even though I was early, there were a few waiting for me! In the same manner as last year I picked a selection of beers and we had sheets to note our scores on. I had a little help with completing the sheets as you can see from the above picture. We scored on Appearance, Aroma and Taste, keeping it nice and simple. 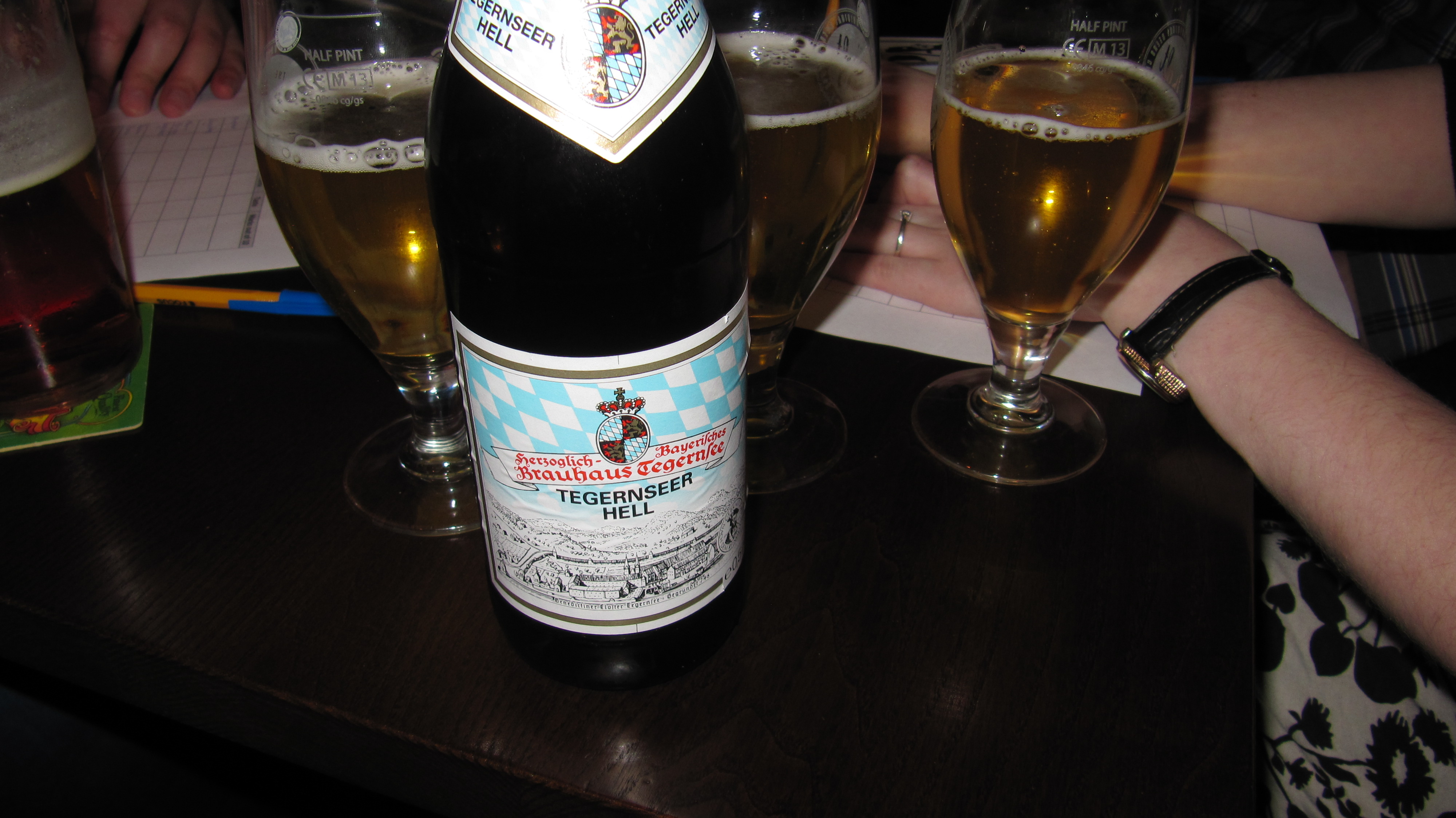 We started with Tegernseer Hell. It was my first time to have this beer, it’s very clean and it was a good way to start the night. Everyone was happy enough with it while not being exactly overwhelmed with enthusiasm. 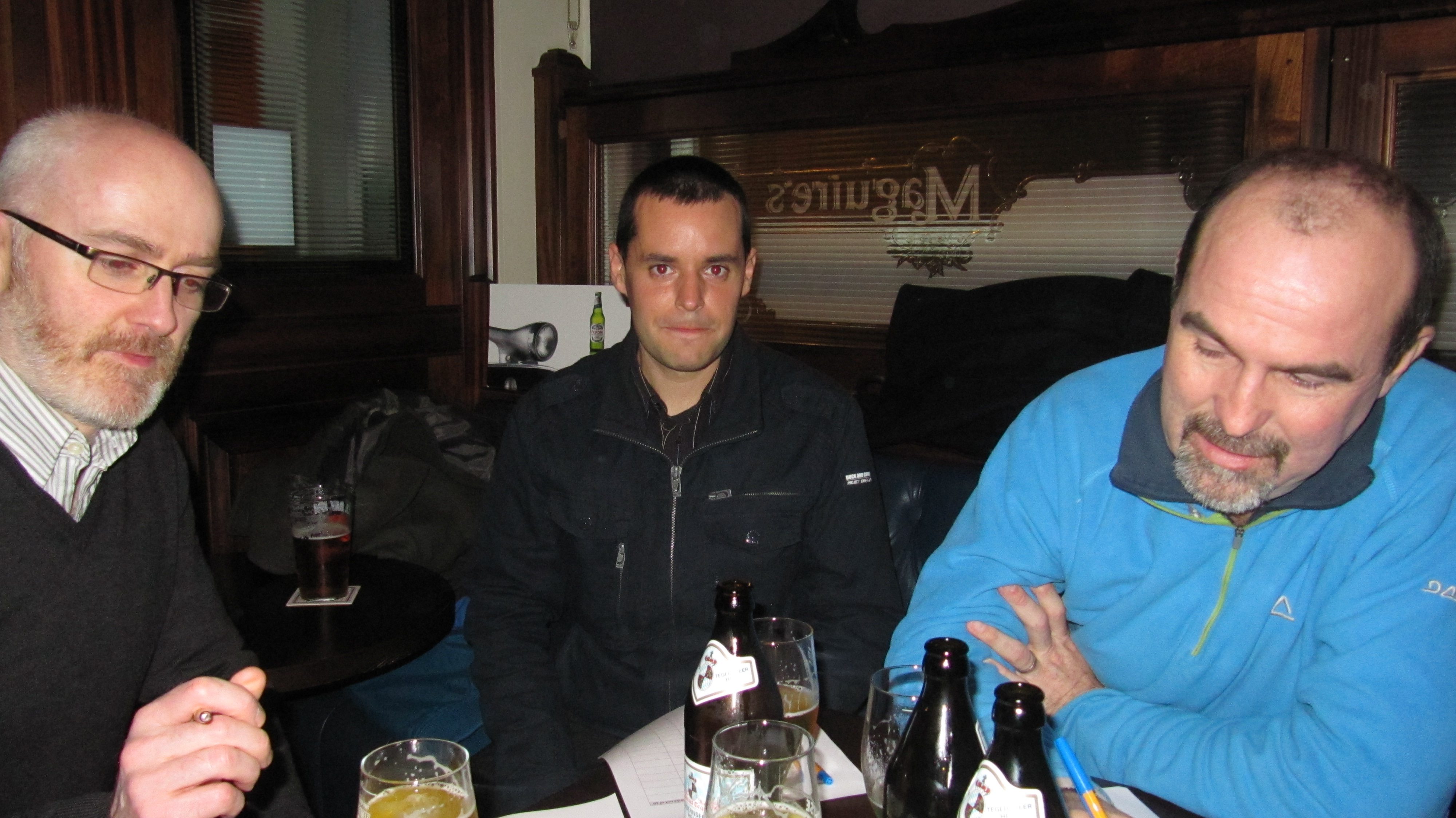 Our next beer was Anchor’s IPA which was more well received, right from the pouring. 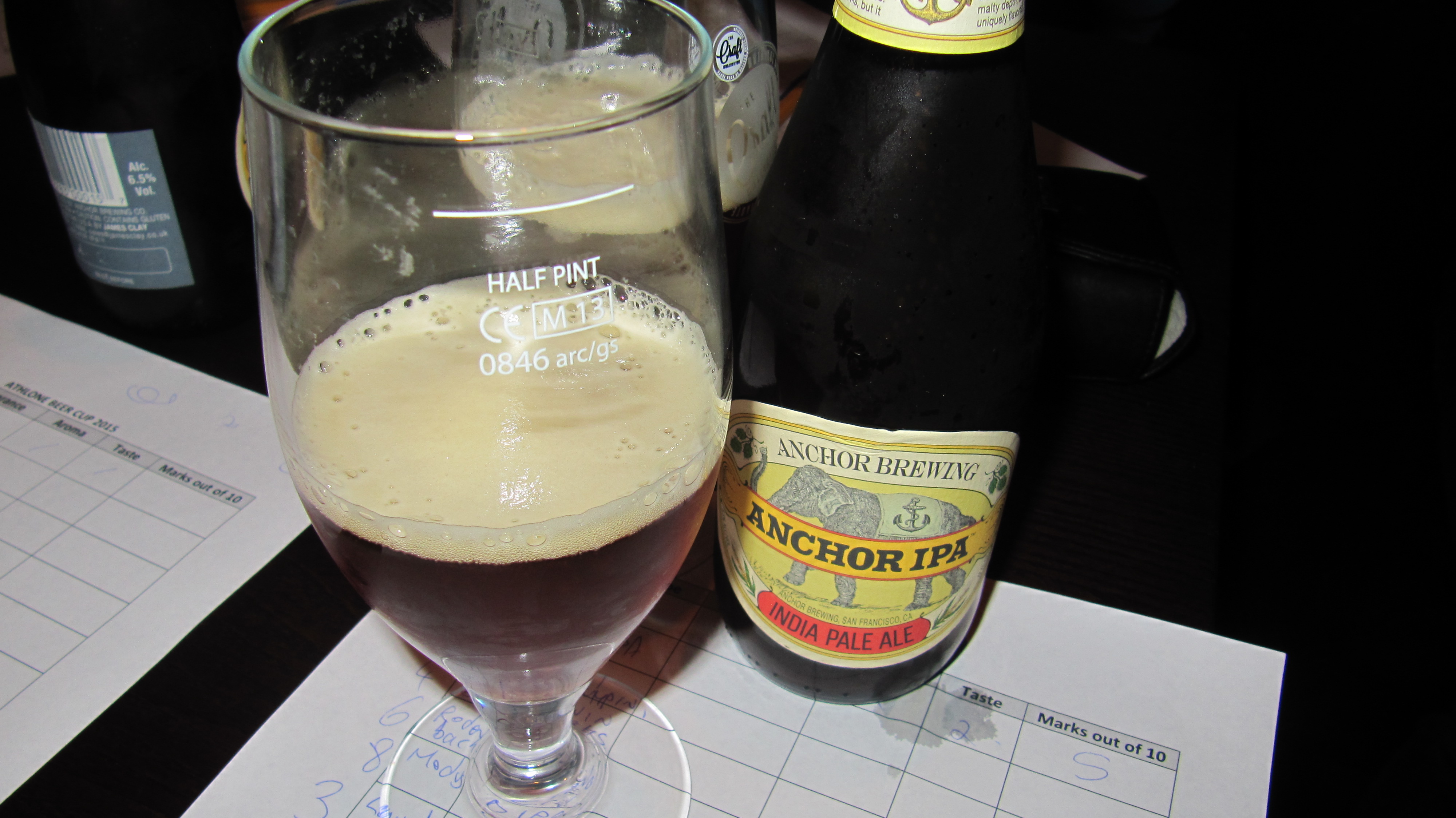 It’s hoppier than I remember it and has more maltiness and body as well. I think it’s a nicely balanced beer, some of the others disagreed, but that’s what it’s all about!

We took to the taps for our next beer as the legendary Lagunitas IPA is on draught in Maguire’s. This was well liked all around the table. 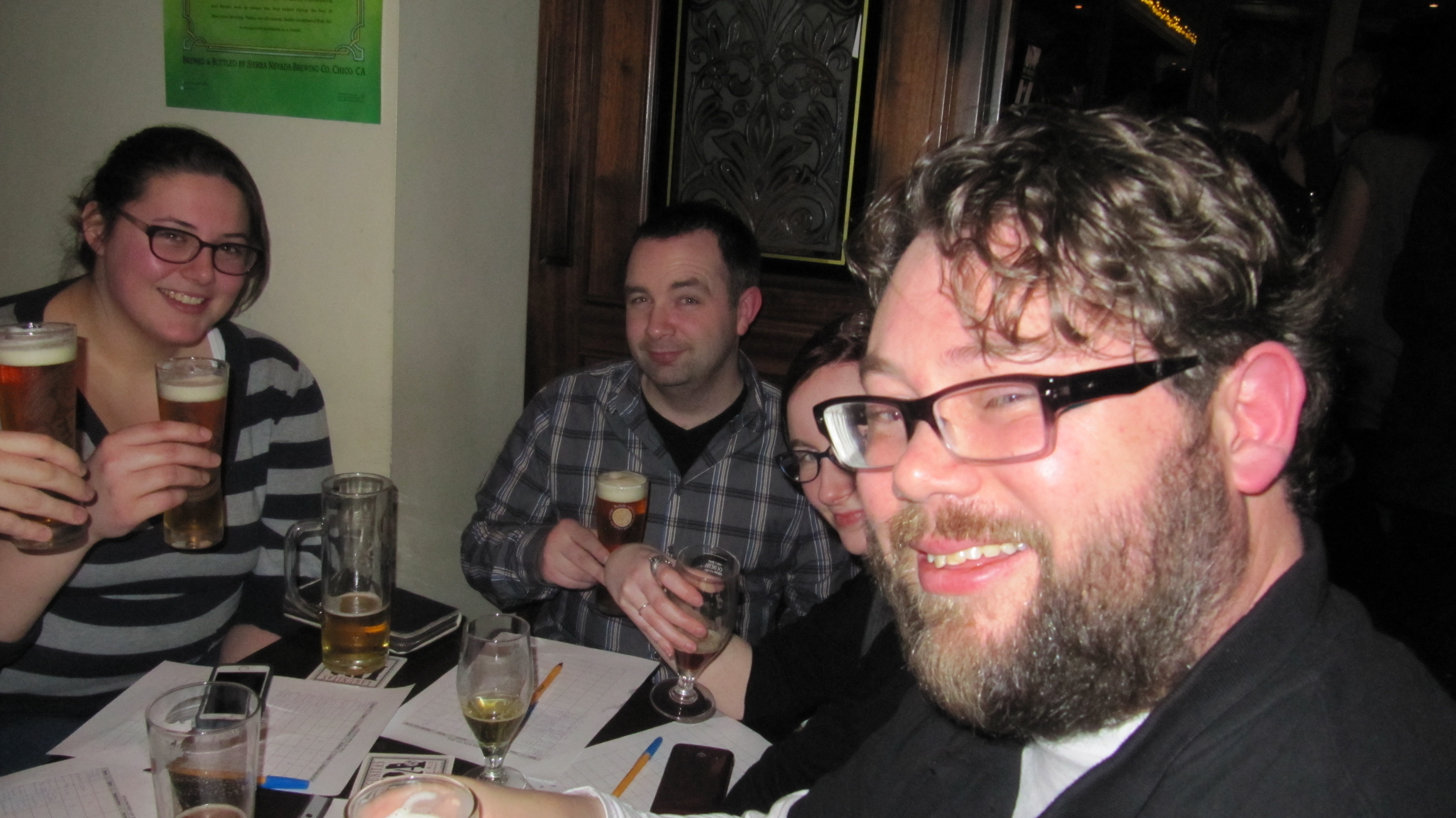 But was it the overall winner? I kind of thought it would be… 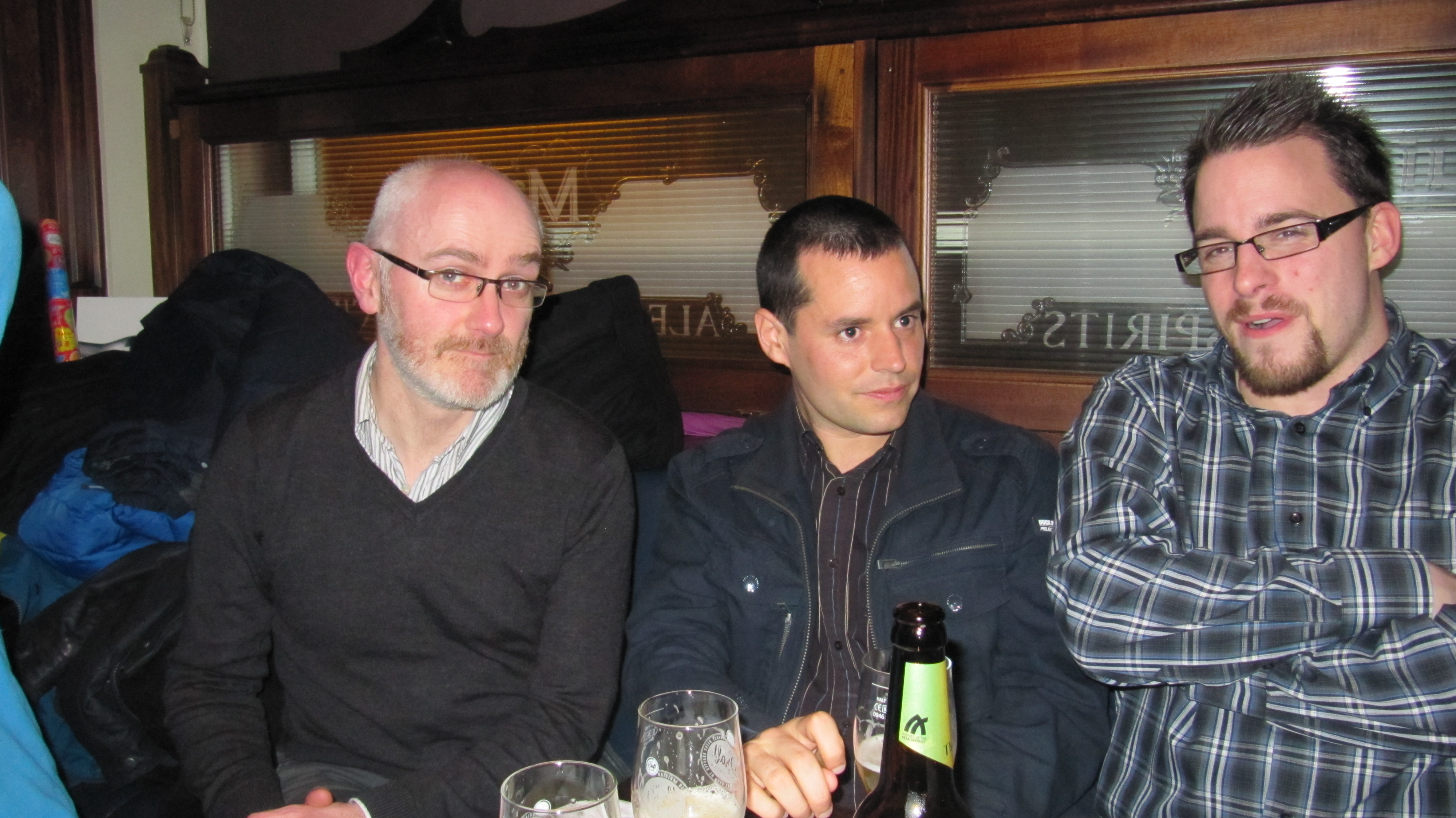 Next we had Thornbridge’s Twin Peaks, which is an English American Pale Ale they made in a collaboration with Sierra Nevada. One or two of the group liked it a lot but the affection wasn’t universal. 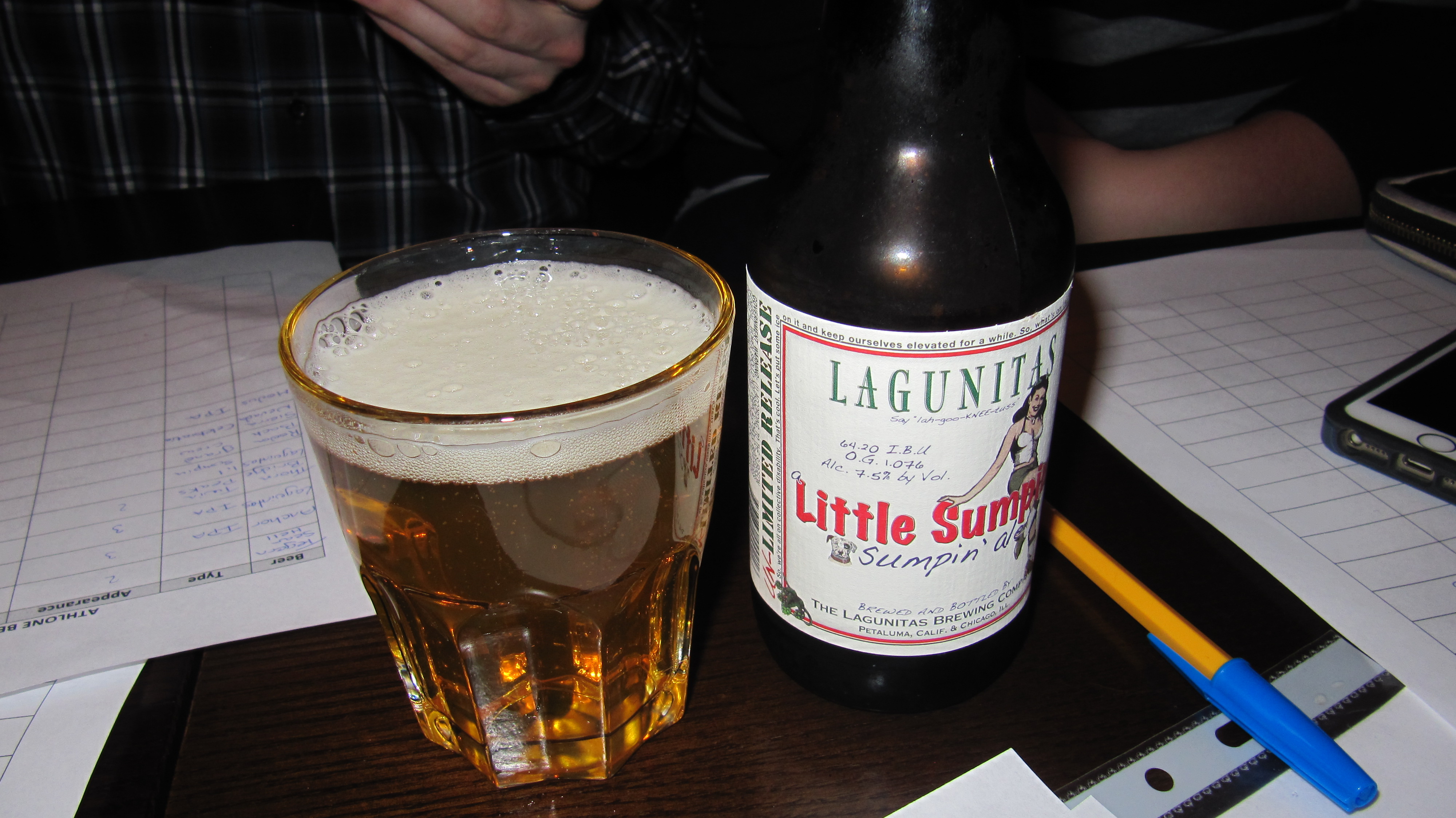 Then we had a Lagunitas Little Sumpin’ Sumpin’ Ale from the bottle. This wheaty ale generated a lot of interest around the table. 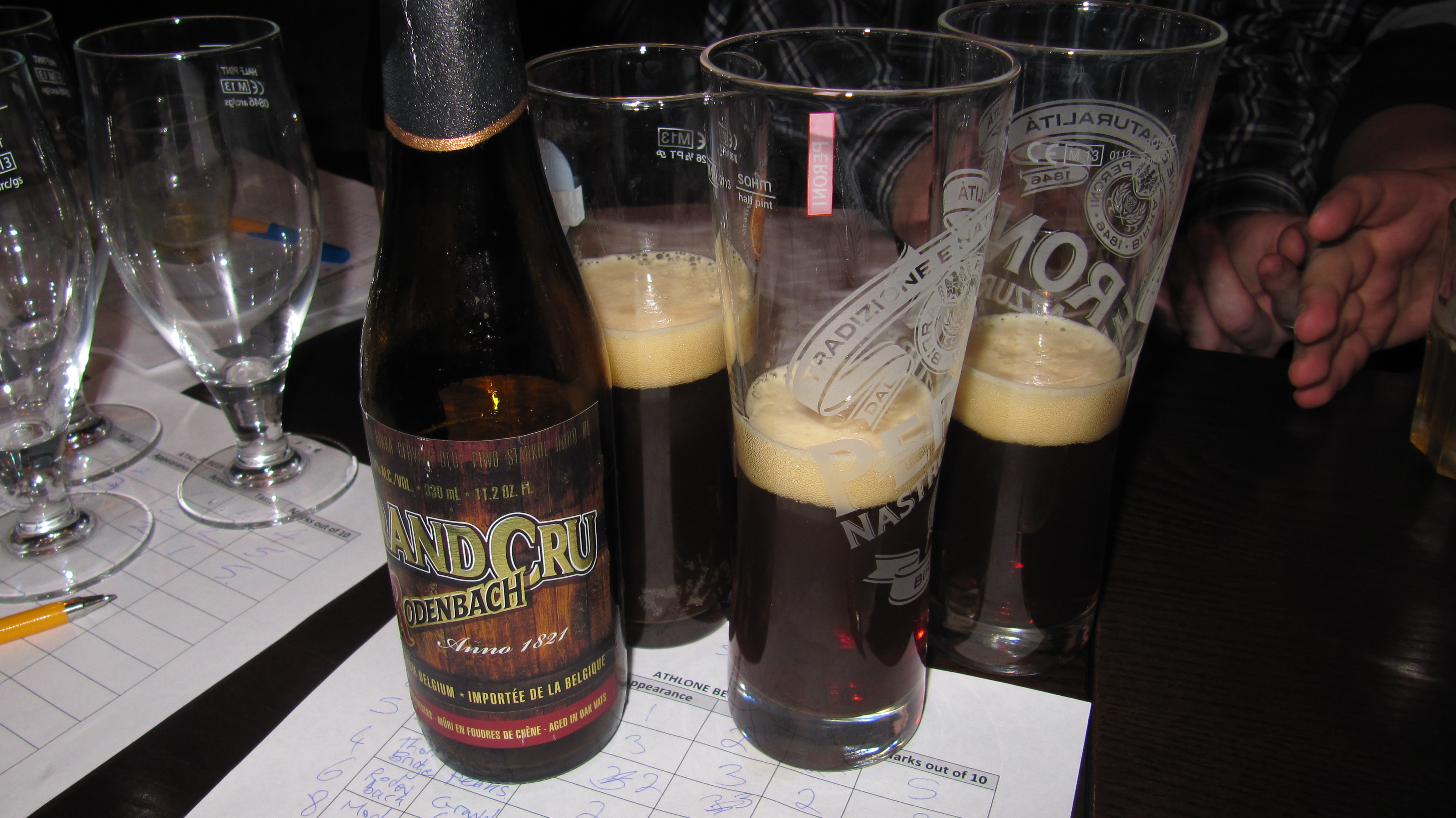 Then, a bit of a curveball, a sour! We had Rodenbach Grand Cru. Stephen even warned me at the bar when I ordered it, ‘You know this one is a sour, right?’ It definitely prompted a reaction from the group. 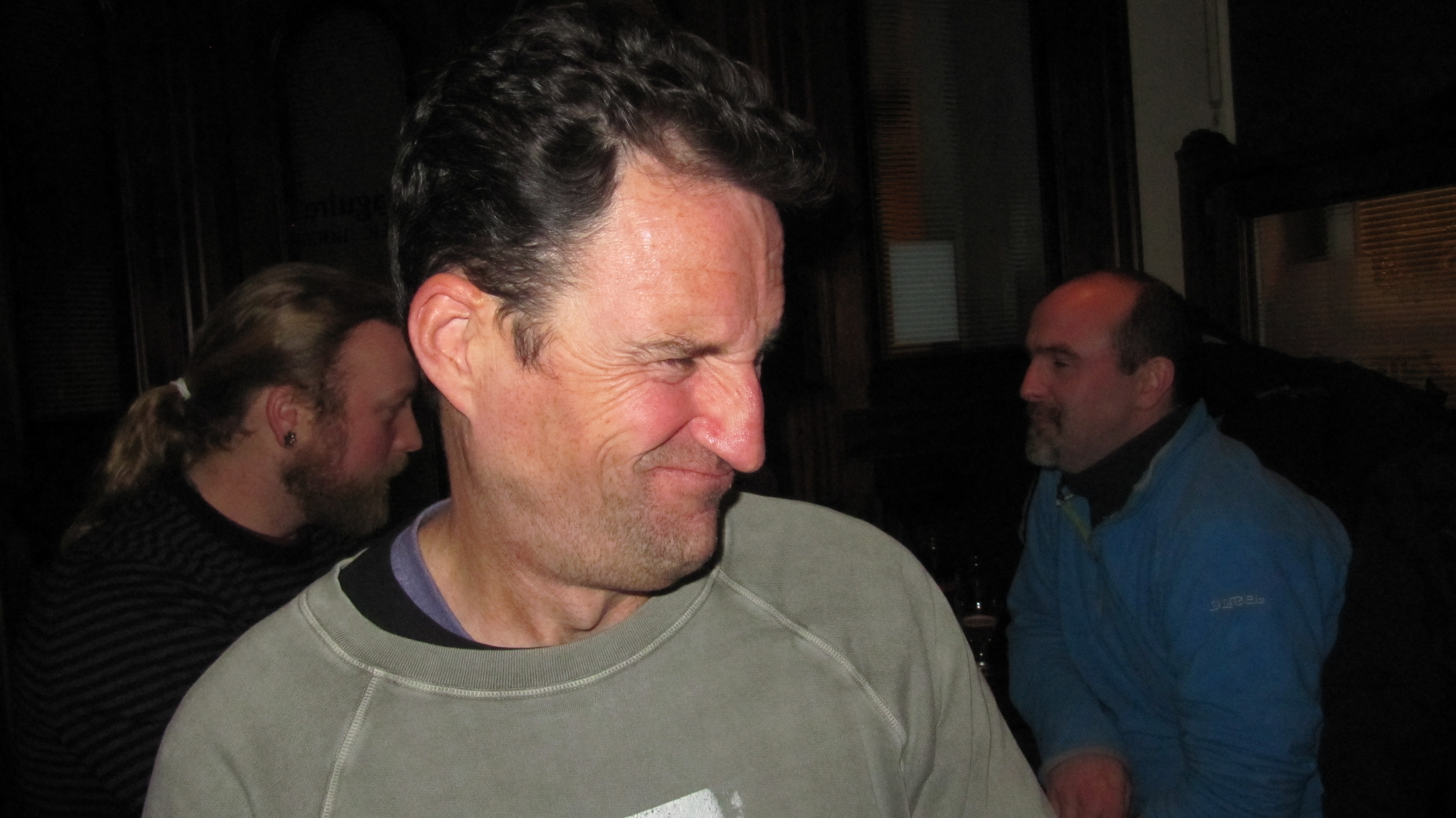 Back on somewhat steadier, safer ground we returned to Sierra Nevada’s Celebration Ale which is also on draught at the moment in Maguire’s. 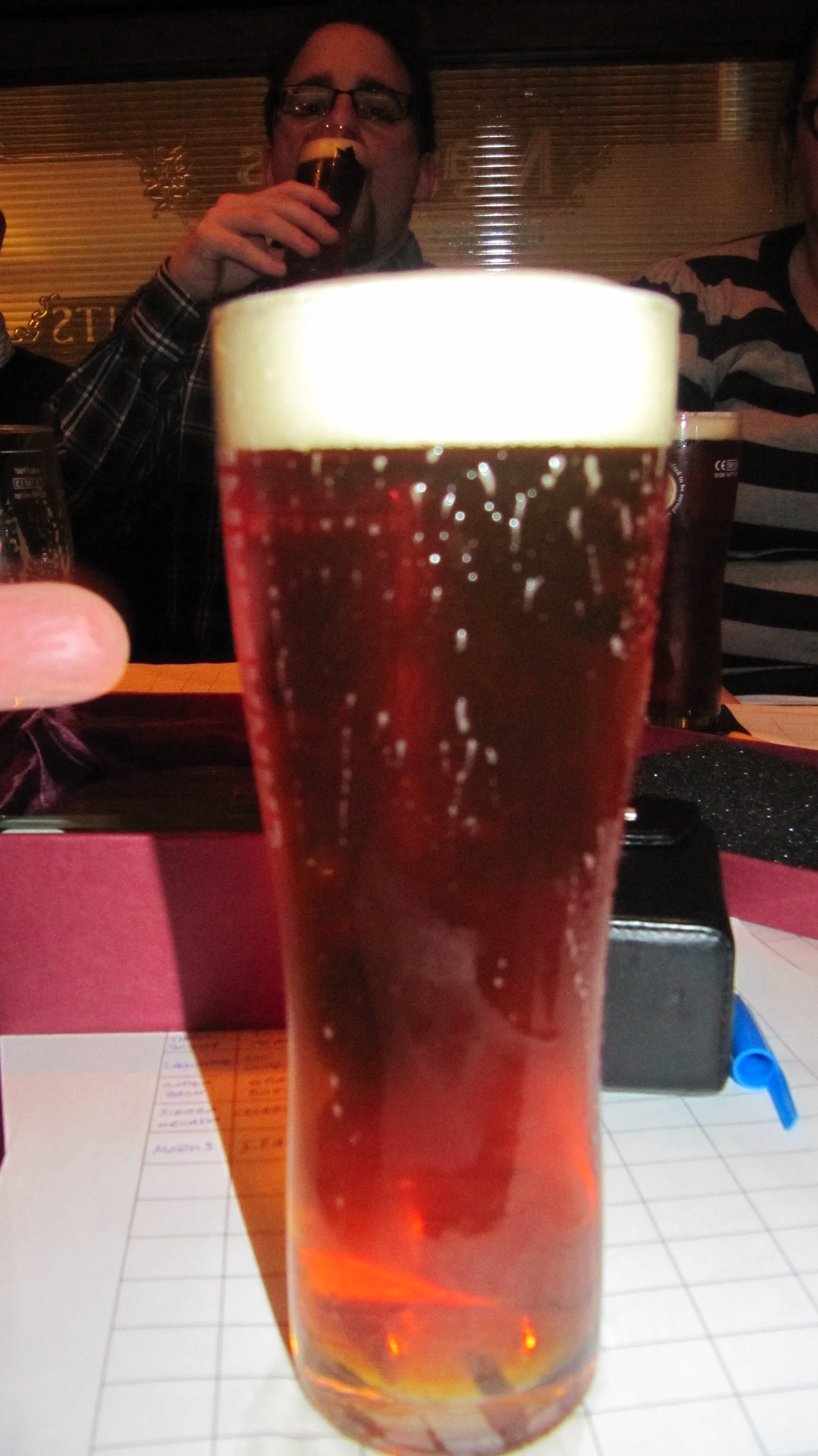 And we finished off the night with a great finisher, Ska Brewing’s Modus Hoperandi. I thought it might have been too hoppy for some of the group but we were after going through a lot over the course of the evening and it was well received. 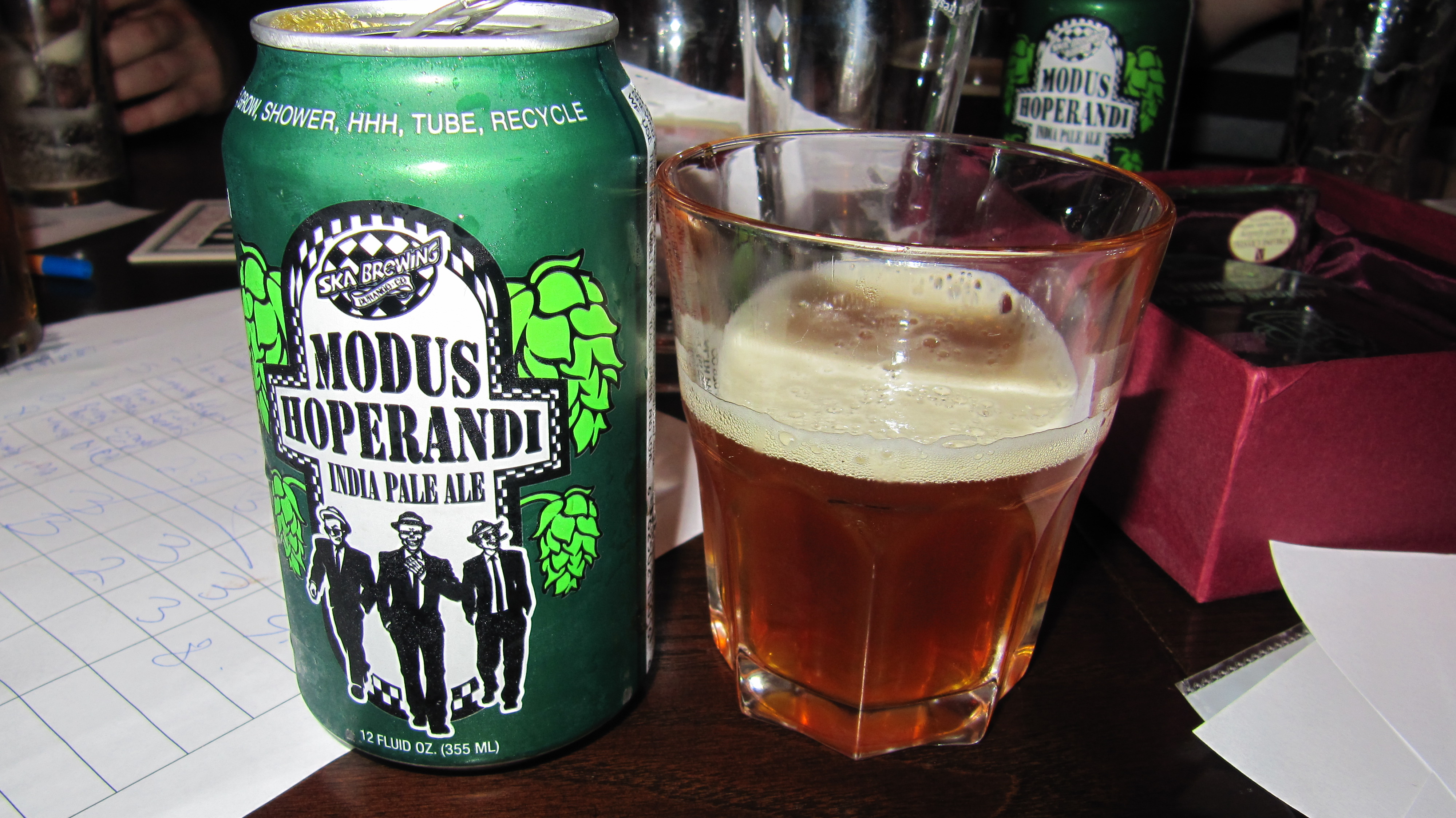 Then it was time to tot up the scores and decide the winner of Athlone Beer Cup 2015. I delegated this task to Hannah who is far and away the best organiser of the group!

…and the winner is: Lagunitas Little Sumpin’ Sumpin’ Ale!!! The Californian Brewery gets the Athlone Crystal engraved plaque for this year. It’s a pity Lagunitas main man Tony Magee has returned home, he was only in Ireland a week or two ago or we would’ve presented the award to him! We held a little side draw at the end and Barry from Maguire’s gave John, one of our new Athlone Beer Clubbers a bottle of Little Sumpin’ Sumpin’ to take home. I was really happy with last night and I think all present enjoyed themselves, Athlone Beer Club has grown up! 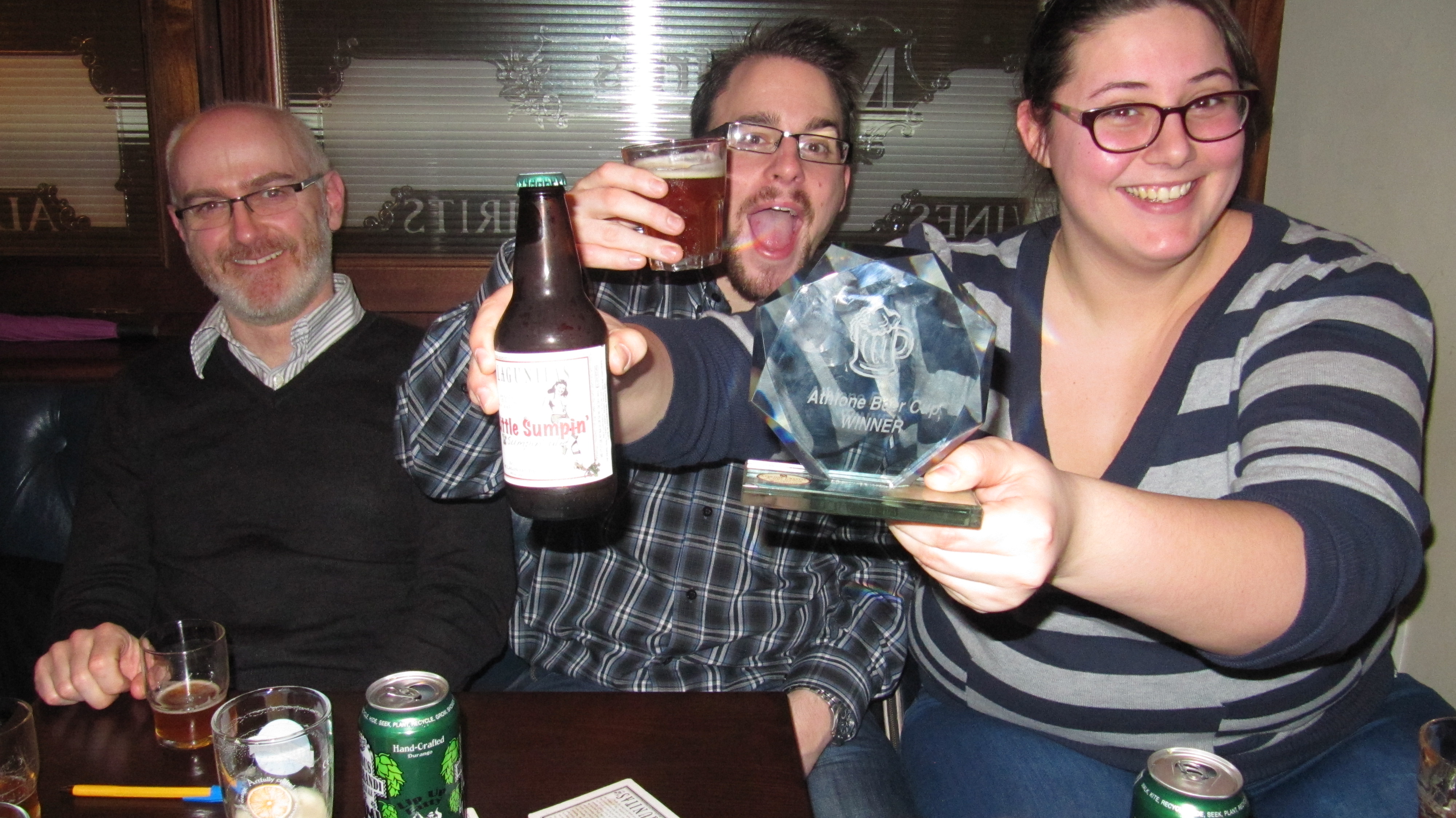 In everything but attitude! If you can taste a wide range of beers and have fun without proceedings getting too pretentious I think you’re on a winner. Thanks once again to Barry and Stephen for looking after us for the night and a round of applause, please, for the Finyl Fridays lads for providing a funky soundtrack. Sláinte!